The Thiruvananthapuram Road Development Corporation Ltd (TRDCL),  the concessionaire  under the KRFB, in association with the District Administration has undertaken the development of roads at Eastfort, during the last two years. The medians were shifted to give more carriage way on the eastern side (fort side). Handrails and signals were erected. But, still people jump over the medians without showing the patience to cross at signals, and fall in front of the buses, causing accidents. The haphazard way in which the buses and other vehicles run, wrong parking of auto rickshaws, footpaths occupied by the hawkers, the large number of KSRTC buses and most importantly, the private buses unauthorisedly parking/ terminating at Eastfort - all contribute and result in frequent accidents. The District Administration had intervened in the matter and made several improvements but the efforts have not become effective, since  all such initiatives are being undertaken on a piecemeal basis, without substantial investments and without a long term vision. Another reason that a comprehensive  plan could not be implemented was due to the fact that several departments/organisations possessing land at Eastfort were not willing to share them for the benefit of common man. 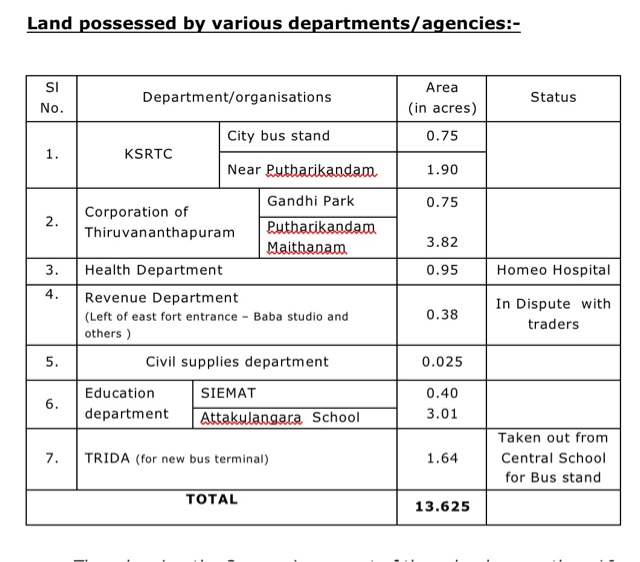 Thus, barring the 3 acres in respect of the school, more than 10 acres of land -- sufficient for implementation of a comprehensive plan at Eastfort. But  what is absent is the comprehensive development plan and  the chaotic situation remains unsolved. It is proposed that the following suggestions may be kindly implemented in a phased manner during the next two years under the CRDP in association with the KSRTC and Corporation of Thiruvanathapuram.
A. Suggestions to improve and beautify Eastfort:-
a. Construct a shopping-cum-hospital complex in the one acre land owned by Health department. About 40  shops in the KSTRC land as well as the disputed land of Revenue department (total area 1.13 acres) to be shifted to the land belonging to the Homeo Hospital of  health department after building the complex in a BoT or Annuity model. Alternatively, without taking the land of the Homeo Hospital, all the shops could be shifted to the two bus stand complexes mentioned in item (d) below.
b. The Gandhi Park to be shifted to the 75 cents now occupied by KSRTC and 38 cents in dispute with the traders, on both sides of the Fort entrance, fully exposing the heritage structure, which is the icon of Thiruvananthapuram. It may be noted Gandhi park is only 75 cents now, it can be shifted to 1.13 acres of land, on the opposite side of the road.
c. The Chalai road shall be extended through the middle of the Gandhi Park, restoring the original glory of East fort and by dividing the park into two, but connected through a subway.
d. The northern part of the Gandhi park shall be combined to the 1.90 acres of land belonging to the KSTRC and a new bus terminal cum shopping complex to be constructed there. KSRTC will gain around 75 cents they lost on the other side.
e. Similarly, the southern portion of the Gandhi Park to be combined together with 1.64 acres of TRIDA (acquired for new Bus Terminal) and another shopping complex cum bus terminal could be constructed (one can be set apart for KSRTC and other for Private Buses, Taxi and Autorikshaws).
f. Multi level car parking, Police outpost, Taxi/Auto Stands etc to be constructed at the land owned by TRIDA.
g. A road starting from the new Bus stand of KSRTC through the front of Sree Padmanabha Theatre and  shall pass through the TRIDA land to meet Attakulangara Junction over the drains (near new Ramachandra Textiles). This will be one way and decongest the Eastfort.
h. A skywalk or a subway, with sufficient measures to prevent flooding, with shops on both sides shall be constructed from the proposed shopping-cum-hospital complex  connecting the new bus terminals and  Putharikandam. Similarly an underpass shall be constructed connecting the two bus terminals.
i. About 60 shops were displaced by the construction of the Thakaraparambu Flyover. Some were rehabilitated by the side of Central Theatre road and blocking one of the main roads. It is proposed that the 23 cents  where Horticorp is located  and the 28 cents in front of the Sree Chithra Home may be utilised for construction of shopping complex on BoT model so that such shifting will not only decongest the Central Theatre road but also have the following benefits.
i. Sree Chithra Home will get extra income from the rental of shops which could be utilised for financial assistance for girls marrying off.
ii. About 60 shop owners could rehabilitated
B. Suggestions to decongest Thampanoor and Improvement of Public Transport System in Thiruvananthapuram 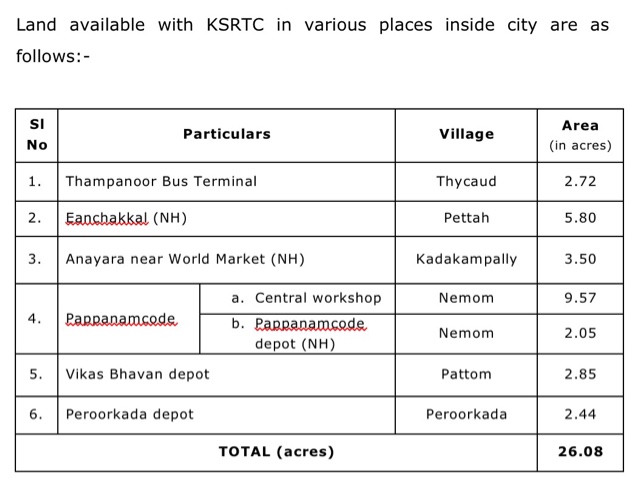